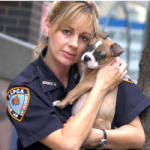 Lotto is the biggest sweetheart and perhaps the worst guard dog of all time. She LOVES everyone – adults, kids, other dogs, the trash guy, the UPS lady. All are rockstars in her book. Lotto is a very petite pittie/bulldog with the sweetest face. She loves playing, but can be pretty mellow when it’s time to settle down. Lotto is incredibly affectionate and loving. She’s currently a “guest dog-in-residence” at Rex & Roxy’s in Decatur, where she’s getting tons of socialization and attention. If you’re looking for a sweet dog who will love you to the moon and back, please email Laura at lmckelvey@paws.org and set up a meet-up with Lotto.